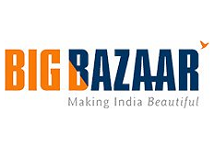 The announcement came as Big Bazaar inaugurated a new store in the P&M Hi-Tech City Centre Mall in Bistupur, which at 32,989 sq ft will be the chain’s second largest location in the city. The company owns eight stores in Jharkhand including two in Jamshedpur and said it planned to open more in the same state soon.

Commenting on the plans, Manish Agarwal, business head of Big Bazaar’s east zone, is quoted as saying: “Altogether, we have 300 stores in over 100 cities across the country and have plan to launch 100 more in the next 12 months”.