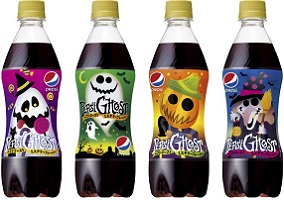 Suntory is expanding its product range in Japan with the launch of the limited edition Pepsi Ghost for the Halloween period.

Pepsi Ghost comes in a total of four varieties, sold in a 490ml bottle, and each is said to feature a ‘mystery flavour’. According to Suntory, the line was designed to offer an element of surprise and fun for Halloween events. The packaging features “cute” and colourful ghost designs, the company added.

Pepsi Ghost is the latest in a line of unusual colas from Suntory. In the past such the company has launched other distinctive flavours, including ice cucumber, azuki beans and chestnut.

Consumers can purchase Pepsi Ghost as limited edition for an RRP of ¥140 ($1.16) from 6th October.