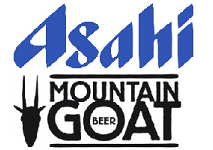 Japanese beer company Asahi has furthered its interest in the craft beer sector with the acquisition of  100% of the Australian brewer Mountain Goat.

Launched in 1997 by Cam Hines and David Bonighton, Mountain Goat produces low-volume beers at a facility in Richmond, Melbourne, while bottled and canned beers are brewed at a larger plant in Laverton, Western Australia.

“We’ve been contract partners with Asahi for three years now, and with their expert help our beer has grown in demand, expanded nationally, and found a special place with beer lovers”, Mr Hines and Mr Bonighton commented. “We are confident that with Asahi on board, we will be able to convert many more people to craft beer than we could do on our own”.

“Mountain Goat has an excellent reputation and a strong track record”, Scott Hadley, chief executive of Asahi’s Australian and New Zealand business, added in a statement. “We plan to preserve the uniqueness of the Mountain Goat business and it will continue operate as a stand-alone business”.

The financial details of the transaction have been not disclosed.