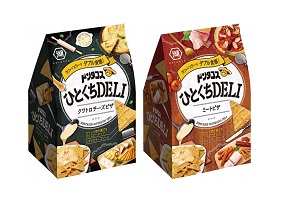 The new range, added under the tortilla crisp brand Dontacos, is claimed to be “more than a snack, less than a meal”, and is designed as a ‘mini-meal’ that busy consumers can consume in between main meals, whenever and wherever they prefer.

The snack, described as having two types of texture – melting cheese and crunchiness – is offered in two flavours: Quattro Cheese, with four types of cheese, and Meat Pizza, with the flavour of cheese and pork. Both of these baked “crispy chips” are presented in 60g bags and will hit shelves from the end of March 2017.