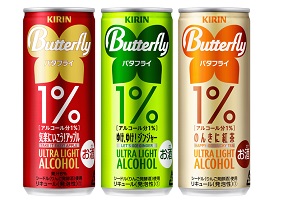 Due for launch on 10th March 2015, Butterfly contains only 1% abv and is said to be have been created in response to the needs of a younger audience. According to Kirin, a survey it conducted revealed that while 90% of those surveyed enjoyed alcohol, they were drinking less heavily than previous generations, citing health concerns and lack of time among other factors.

Based on cider, the Butterfly range is designed to be consumed easily and casually in any situation. It comes in a 250ml single serve size and is available in a choice of three flavours: Kiraku ni Iko! Apple (Take it easy! Apple) in a red can, Yuke, Yuke! Ginger (Let’s Go! Ginger ) in a green can, and Nonkini Kocha (Happy-go-Lucky Tea)” in a pale brown can.