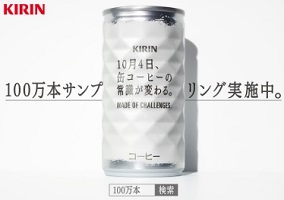 Kirin, the Japanese beverage firm, has announced a new marketing initiative that will see its latest coffee offering promoted to consumers in unmarked and unbranded cans.

The new ‘blind’ marketing campaign, promoted as “secret sampling”, sees free cans distributed among Japanese consumers without revealing either the product’s name or its formulation. The sampling initiative was launched in mid September in seven of the largest cities in Japan, with one million cans distributed in what was said to be the largest sampling exercise in the firm’s history.

“Because we are so confident of the taste of our new coffee, we want consumers to enjoy it without being prejudiced by too much prior information”, the company said.

The free samples will be distributed via vending machines, retail stores and the company website, with the new coffee finally available for sale from 4th October.