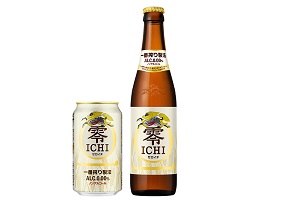 The new Zero Ichi is described as a “first of its kind” product in the alcohol-free beer sector, since it uses an Ichiban Shibori method that is “a unique brew made exclusively from the first press of the wort” and is used to produce Kirin’s signature beer brand Kirin Ichiban Shibori. By using this method this time for anon-alcohol beer product, Kirin claims the new drink tastes more like beer, with a wheat flavour.

Said to be free from artificial sweeteners and bittering agent, Kirin Zero Ichi is targeted at consumers in their 30s to 40s for any occasion. The product is due to be launched on 11th April, with consumers able to choose from cans of 350ml and 500ml, or small glass bottles.