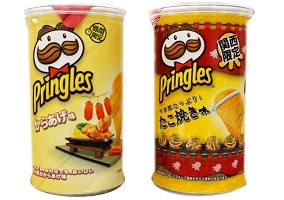 The two flavours to be introduced are Karaage (Japanese Fried Chicken) and Takoyaki (a savoury ball typically filled with octopus). The former is described as having a juicy and aromatic chicken flavour with a hint of soy sauce, garlic and onion , and has been launched nationwide on the 6th of December with an RRP of ¥122 ($1.07) for a 53g pack. Meanwhile the latter is described as having mayonnaise and sauce flavours with a hint of bonito and ginger and will be only available in the Kansai region in the south-west of Japan which is especially associated with takoyaki. It sells as a set of three with an RRP of ¥600 ($5.26).