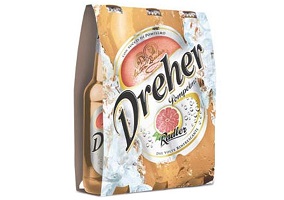 Heineken Italia is continuing its expansion in the low-alcohol beer with the launch of a new variety of its Dreher beer made with grapefruit Juice.

Dreher Pompelo follows the  successful launch of Dreher Lemon in 2013 and Dreher Lemon 0.0% in 2014 –  representing respectively, the first ‘radler’ and the first alcohol-free ‘radler’ to be produced for the Italian market by Heineken – and is promoted as offering “double refreshment”.

Dreher Pompelmo is made from Dreher beer blended with grapefruit juice and has an alcohol content of 2%. It is described as having a pleasantly cloudy colour and a light and balanced flavour, and is recommended as a drink for the summer months.

The product is being launched in mainstream retail channels as a pack of 3x33cl glass bottles.