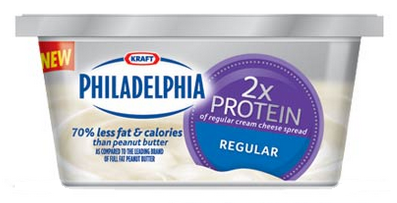 This week Gama looks at a significant mainstream move for protein enhancement, with the launch of Kraft Philadelphia 2x Protein Cream Cheese Spread.

Recently debuted in the USA, Philadelphia 2 x Protein is a new version of the classic cream cheese which, as the name suggests, contains twice as much protein (4g vs 2g per serving) as the standard version. Available in regular and honey flavours, the new product is aimed at the increasing number of consumers following “protein diets”, according to publicity from Kraft.

Although perhaps yet fully to conquer the mainstream, protein enhancement is a trend that has certainly been gathering pace in recent years, especially in the USA. Traditionally the preserve of athletes looking to enhance performance or build muscle, protein began to broaden its appeal once its purported functional properties gained wider publicity. Chief among these was satiety – spurred on by the surge in interest in high-protein weight loss diets such as Atkins in the early 2000s, protein began to build a reputation as an appetite suppressant, with carbohydrate-rich foods suffering as a consequence.

Aside from the satiety factor, the rise of protein enhancement can probably also been seen in the context of a growing interest in vegetarian diets, with an increasing number of consumers looking to substitute meat-derived proteins in their diet with those of alternative origin. The success of superfood grains such as chia is a further example of how such “alternative proteins” have begun to take hold amid a growing aversion to meat proteins.

More recently, the high-protein trend has evolved further, especially with increased diversification in the breakfast food market. The booming breakfast drinks category, frequently promoted as an on-the-go “fuel”, has provided further opportunities for protein-enhancement, tapping into the notion of protein as offering “strength” or “sustenance”. Promotional literature for Philadelphia 2 x Protein recommends the product as “part of a nutritious breakfast”, suggesting that this high-protein breakfast market is one that Kraft is also trying to capture.