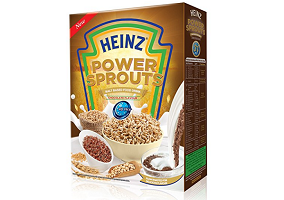 Kraft Heinz has expanded its portfolio in India with the launch of a new functional malt drink powder, according to reports in Just Food and The Hindu BusinessLine.

Heinz Power Sprouts are “enriched with the power of sprouted grains”, and are described as containing ragi and barleywo main along with soya and wheat. The product is being positioned as a healthy meal drink which promotes bone development and aids digestion. Kraft Heinz reportedly claims that the ingredients “support physical and mental growth”.

“Ragi is known to be a rich source of calcium – a significant factor for bone development”, Kraft Heinz is quoted as saying. “It contains higher amounts of dietary fibre and aids digestion, prevents over-eating and makes one feel fuller for a longer span of time. Barley is rich in fibre and is also a source of calcium. Wheat is a rich source of energy while soybean is a source of superior quality of protein. It contains all the essential amino acids necessary for human nutrition”.

Heinz Power Sprouts is available in Honey Dates and Chocolate flavours and will be available across India in refillable 500g packs at an RRP of $3.44.