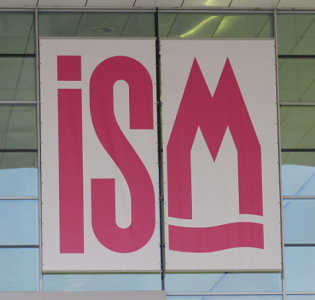 This week saw the latest installment of the ISM (Internationale Süßwarenmesse) tradeshow in Cologne, where buyers and exhibitors from across the world gathered for the annual confectionery industry showcase.

ISM reported a 5% upturn in exhibitor numbers versus 2013, perhaps indicating a gradual return to confidence among confectionery companies after a number years of uncertainty. 1,476 companies representing 68 companies exhibited, compared to 1,402 in 2013. Visitor numbers were stable, with an anticipated 35,000 attending over the four days of the event.

Among the year’s special features was the ISM Newcomers section, into its second year, highlighting around a dozen first-time exhibitors at the show. Meanwhile, perhaps with the FIFA World Cup in mind, Brazil was the year’s partner country, with 27 companies exhibiting in a dedicated showcase labelled “Sweet Brazil”.

As expected, the World Cup turned out to be a major focus of innovation, with many companies, particularly in sectors such as crisps and popcorn, launching Brazilian-inspired flavours to tap into an expected surge in “social snacking”.

However it was the continued penetration of stevia into the confectionery industry that emerged as the key innovation take-out of the event. Alongside specialist sugar-free producers, many established conventional chocolate manufacturers were signalling their intention to diversify with new launches. And it was not only chocolate seeing the shift, with new stevia-based products cropping up in categories as diverse as jam and ice cream.

Despite a focus on innovation in many quarters, the mood on the ground remained cautious. Many predicted 2014 to be another difficult year, even if there were some grounds for optimism with signs of growth in key markets. Any enthusiasm over the improving macro-economic situation remained largely tempered by ongoing rises in commodity prices, especially in cocoa products.

Read more about ISM 2014 in the February edition of Gama News.