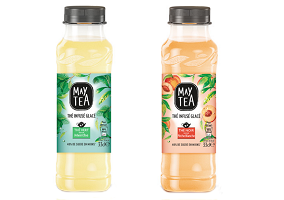 Orangina Schweppes, a division of Japanese firm Suntory, has announced a foray into the world of ice tea with the launch of  a new product line in France, according to a report in LSA.

The launch of Maytea Ice Tea follows double-digit sales growth for ice tea in France over recent years, LSA reports. The line is being made available in a number of “spring” oriented flavours that are said to be particularly targeted at adults, which include varieties such as Black Tea with White Peach and Green Tea with Mint. Both varieties are claimed to contain around 40% less sugar than typical soft drinks – in the order of 4.7g per 100ml, according to sources – and are additionally claimed to be free from artificial sweeteners, colours, flavours and preservatives.

Maytea Ice Tea is being sold in four-packs of 330ml plastic bottles.