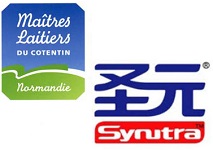 French dairy producer Les Maitres Laitiers du Contentin (MLC) has signed a supply contract with Synutra, a Chinese infant formula company, which will provide for the construction of a production plant in Normandy France.

“This contract will enable the construction of a new plant in Meautis, in the Manche department, with an investment of €114 million, and will create 200 jobs”, MLC management is reported as saying. Financial details of the contract were not disclosed

Construction on the plant is expected to begin in late 2015 or early 2016, with the first deliveries to China anticipated for April 2017.

According to MLC, the plant will be able to produce 90 million litres of milk annually, allowing the company to turn out 690 million 20cl units of infant formula once the plant is completed.

Synutra is a leading infant formula company in China, which principally produces, markets and sells its products through its operating subsidiaries under the “Shengyuan” and “Synutra” names, together with other complementary brands.