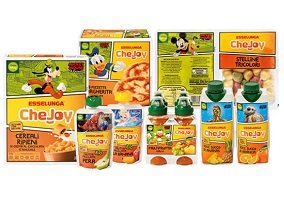 Italian retail store chain Esselunga has launched a new line of products under the CheJoy brand name, which are targeted at children from the age of four.

Created in partnership with Walt Disney, the products feature Disney characters such as Mickey Mouse, Minnie Mouse and Donald Duck, as well as characters from the Frozen, Star Wars and Spider-Man film series. The range is described as featuring options for breakfast, meals and snacks, and is said to make use of organic ingredients, as well as being free from artificial colours and flavourings.

Current items in the range include juice, cereal, mashed potato, pizzas and bottled water. Esselunga plans to incrementally expand the offering to 50 products by September of this year.