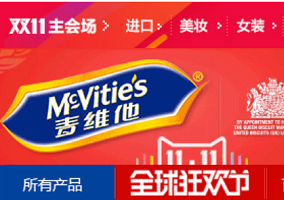 United Biscuits, the UK manufacturer of bakery products under the McVitie’s brand, has officially opened its flagship eCommerce store for consumers in China on Alibaba Group’s Tmall platform.

The launch of the new store was timed to coincide with Alibaba’s 11.11 Global Shopping Festival (a 24-hour annual sales event in China) and aims to further the interest that Chinese consumers have been showing in McVitie’s products since the brand’s launch in conventional channels in China in 2012, United Biscuits said.

Marcel Willems, United Biscuits regional general manager Greater China, commented: “China is a very important market for United Biscuits, and we have high expectations of our flagship store on Tmall Global. McVitie’s is an iconic British brand, and via our Tmall Global store, we are making the brand accessible to another 386 million potential consumers across China, who all now have the opportunity to buy the Original McVitie’s Digestives in British packaging, directly from the source”.