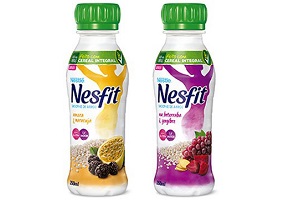 FMCG multinational Nestle has launched Nesfit Smoothie, a 100% plant-based drink made with whole grain rice and fruit juice, for the Brazilian market.

The low-calorie beverage is described as a light and smooth drink containing whole grains that preserve the three parts of the grain (bran, endosperm and germ), alongside fruit juices such as passion fruit, blackberry and grape. Promoted as a source of fibre, calcium and vitamin D, it is also claimed to contain other nutrients such as iron, zinc and vitamin A. In addition, it is said to be free from gluten, lactose and cholesterol.

Nesfit Smoothie comes in a 260ml bottle that is said to contain fewer than 80 calories, and is available in two varieties: Grape Beetroot & Ginger, and Blackberry & Passion Fruit.