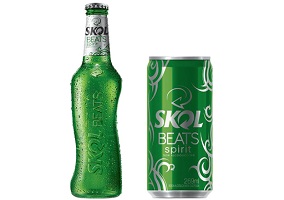 AmBev, Brazil’s leading brewer, has announced the release of the latest addition to the Skol Beats portfolio.

The brand line, which which already includes the beers Skol Beats Extreme and Skol Beats Senses, aims to offer differentiation through flavour and packaging, and is especially designed for ‘nighttime occasions’.

According to sources, Skol Beats Spirit is an apple and lemon flavour beer with 7.9% abv and comes in 330ml green ‘S’ shaped bottles with glow in the dark labels, and also in 269ml cans. The beer is reportedly also green coloured and is recommended to be consumed over ice.

Skol’s portfolio manager Taciana Avila said: “This is another major release targeting consumer needs in nightclubs. We want Spirit to be the passport to an entirely different and surprising experience. The beer’s flavour and colour completely differentiates it from anything else out there in the market. We want Spirit to awaken new sensations and experiences and release the unpredictable”.

The product is available at nightclubs and also in supermarkets throughout the country.