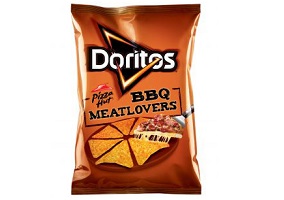 From 12th July 2016, consumers in Australia will be able to purchase a new flavour variety of Doritos tortilla chips called Meatlovers BBQ. The flavour was developed in partnership with pizza restaurant chain Pizza Hut.

The two firms had previously worked together in 2014, when a Doritos-stuffed pizza crust was released in Pizza Hut restaurants. This time, the partnership has resulted in the Meatlovers Pizza flavour, which is described as tasting of bacon, smoked ham, pepperoni, Italian sausage, beef, mozzarella and BBQ sauce.

Commenting on the launch, Doritos senior marketing manager Sheri Juchau said: “It takes snacking to a new level that will excite consumers and unleash brand and category growth”.

The product is available in packs of two sizes: 80g and 150g.