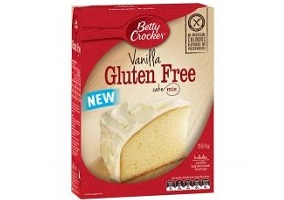 According to Australian Food News, the mixes come in three varieties of vanilla cake and devil’s food chocolate cake, which both include icing, as well as chocolate fudge brownies. The new launches are said to be equivalent to three existing varieties in the standard Betty Crocker baking mix range which contains more than 30 SKUs including muffins, tarts, cupcakes, brownies and cookies.

In addition to being gluten free, the new cake mixes are claimed to be free from artificial colours, flavours and preservatives.

Available at Coles, Woolworths and independent supermarkets, Betty Crocker gluten-free cake mixes have a recommended retail price of A$6.59 ($4.93) for 450g.