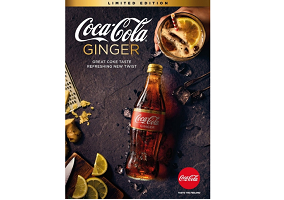 Coca-Cola South Pacific, the Coca-Cola division responsible for countries such as Japan, South Korea, Australia and New Zealand, has announced the world premier of a limited edition ginger flavour Coca-Cola drink in Australia as it prepares for the summer.

Coca-Cola Ginger is described as “giving consumers a refreshing ginger twist on the classic Coke taste” and is said to be aimed at attracting young adults as well as occasional and lapsed Coca-Cola drinkers.

Marina Rocha, Coca-Cola South Pacific group marketing manager, said: “We are confident the new flavour will be perfect for our audience, with research revealing that ginger is particularly popular during the summer months. Introducing Coca-Cola Ginger to market is the ideal way to spearhead our exciting and unexpected summer campaign that we’re confident will capture the imagination of Australia”.

The limited edition packs are available in Coles, Woolworths, convenience stores and independent retailers and petrol stores from late October 2016.

The launch of Coca-Cola Ginger follows rival PepsiCo’s foray into ginger flavours, with the launch last year of Pepsi Ginger for the Canadian market.