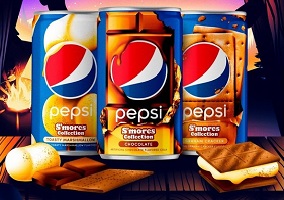 FMCG giant PepsiCo has launched a limited-edition range of S’mores inspired flavours for its Pepsi cola line in the US.

Released on the last day of summer, the Pepsi S’mores Collection is available in the varieties Toasty Marshmallow, Graham Cracker and Chocolate. The Toasty Marshmallow variant is said to have a marshmallow base with toasted notes to bring out the “fireside flavour”, whilst the Graham Cracker variety is said to have notes of honey and cinnamon. The Chocolate variant features cocoa and vanilla notes to resemble the flavour of melted chocolate.

The Pepsi S’mores Collection is available in individual 7.5 oz mini cans in order to encourage “mixing and matching”, according to the company.