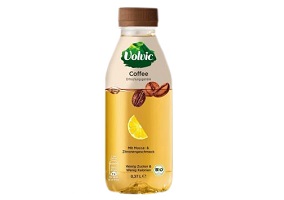 The German division of Danone, the dairy and bottled water giant, has launched a new water under the Volvic name that is said to be infused with coffee and to feature added fruit flavours, according to a FoodBev report.

Claimed to be a “sensational alternative to iced tea”, the new coffee-infused water is available in Mocha & Lemon, Robusta & Cassis and Arabica & Passion Fruit Lychee varieties.

The new launch is packed in in 370ml and 750m PET bottles retailing at €0.99 ($1.11) and €1.69 (€1.90) respectively. Launching in retailers such as REWE, HIT, Globus, Edeka and Wasgau, the product is promoted as free from artificial preservatives, artificial flavours and sweeteners and is claimed to contain 25 calories per 250ml serving.

Volvic natural mineral water is sourced in Clairvic Spring, Auvergne Regional Park, France and is currently exported to more than sixty countries. Volvic has been part of the Danone Group since 1993.