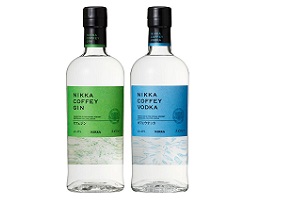 The “premium” brands, to be available from June, are Coffey Gin and Coffey Vodka, sold under the Nikka brand. Both are said to have been distilled in a “Coffey still”, which is claimed to be”a very traditional and rare patent Nikka still imported from Scotland in 1963″.

Coffey Gin is said to be made with distilled liquid made with malts and corn, blended with separately distilled Japanese pepper and Japanese citrus fruits such as yuzu and common juniper, where the flavours of ingredients areextracted at the highest level. The flavour of the product is described as deep, sweet yet mellow with a botanical scent.

Meanwhile Coffey Vodka is described as having floral scent of malts and caramel-like flavour from corn that are soft, deep and smooth.

The company has announced that the products, which have 47% and 40% abv respectively, will be sold in Europe and the US, from September, following launch in Japan. The RRP is ¥4,500 ($40).