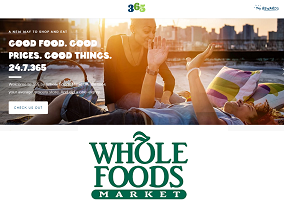 Whole Foods Market, the US natural grocery retailer, has opened the first of its 365 branded stores in the Silver Lake section of Los Angeles, California, according to a report in Supermarket News.

First mooted in May of last year, the Whole Foods Market 365 brand offers “food with good values, at a good value”, according to a website banner. “We believe that good choices one-up more choices. The result? Just the good stuff. At a really good price”, the website adds.

“We want [365] to appeal to a wider audience”, Supermarket News quotes Whole Foods Market executive Jeff Turnas as saying. “This model allows us to compete with everybody in the market”.

The new stores, which are said to particularly target millenials, are described as having a more limited assortment than regular Whole Foods Market stores  as well as more pre-packaged products and fewer service departments to reduce the number of in-store staff required.

Silver Lake is one of three Whole Foods Market 365 in the offing for 2016, Supermarket News reports, with further locations in Lake Oswego, Oregon and Bellevue, Washington planned for later in the year. An additional 10 stores are said to be in the pipeline for 2017.