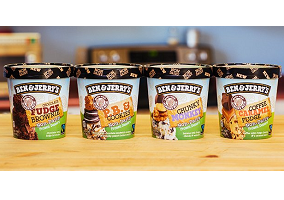 Unilever has announced the launch of its first non-dairy offerings under the Ben & Jerry’s brand.

The new vegan ice creams, first rumoured to be in development last June, are based on almond milk and will be rolled out to stores in the US over the next few weeks, according to an article in Time Money.

A statement on the Ben & Jerry’s website reads: “You dared us to go dairyless — and we did! Ben & Jerry’s Non-Dairy flavor creations are made with almond milk & so boldly loaded with chunks & swirls that you’ll get Ben & Jerry’s euphoria in every bite”.

The four dessert flavours are vegan-certified, made with fair trade and non–GMO ingredients, the company said.