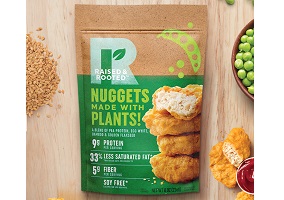 Tyson Foods, the US meat firm, has announced its first major foray into plant-based foods with the launch of its new Raised & Rooted brand, and a range of vegetarian and blended products.

The initiative makes Tyson Foods the largest US meat producer to enter the alternative protein segment with its own products, the company said in a statement.

The initial products under the Raised & Rooted brand include plant-based nuggets as well as blended burgers made with a combination of beef and plants, Tyson Foods announced, while new Whole Blends sausage and meatballs, made with chicken and plant-based ingredients, will also be added under the Aidells brand.

Commenting on the launch, Tyson Foods president and CEO Noel White said: “Today’s consumers are seeking more protein options so we’re creating new products for the growing number of people open to flexible diets that include both meat and plant-based protein. For us, this is about ‘and’ – not ‘or.’ We remain firmly committed to our growing traditional meat business and expect to be a market leader in alternative protein, which is experiencing double-digit growth and could someday be a billion-dollar business for our company”.