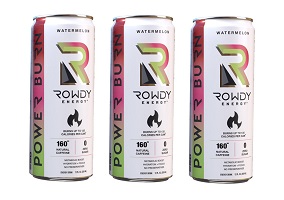 Rowdy Energy, a US-based manufacturer of energy drinks, has announced the launch of Power Burn, a new product that is claimed to burn up 135 calories per can, in addition to having energising benefits.

Launched in Pink Lemonade, Pineapple Passionfruit, Mango Dragonfruit, and Watermelon varieties, Power Burn energy drink is described as containing only 5 calories per can and as providing 160mg of natural caffeine from green tea and green coffee beans. According to the company, it is also “packed” with amino acids and more electrolytes than leading sports drinks, building lean muscle and enhancing overall wellness.

Commenting on the launch, Rowdy Energy CEO and co-founder Jeff Church said: “We’re thrilled to introduce this new line as the initial response has been overwhelmingly positive with consumers loving the taste and being excited about the calorie burning aspect. […] Having this new health-forward, thermogenic line allows us to be at the forefront of innovation within the industry”.

Power Burn has been launched across the US in 7-Eleven convenience stores.