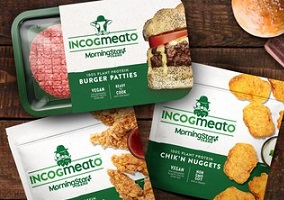 Kellogg, the leading US cereal and snacks firm, has announced it is expanding its MorningStar Farms plant-based range with the launch of Incogmeato, a new line of imitation meat products.

The “next-gen” product line is said to include the company’s first ready-to-cook plant-based burger, which will be sold in the refrigerated meat aisle, as well as frozen, plant-based imitation chicken tenders and nuggets.

”We know the number one barrier to trying plant-based protein is taste”, she added. “These consumers are still seeking the amazing taste, texture, and sizzling qualities of meat but want a better alternative for themselves and the planet”.

The new Incogmeato line-up will be launched in grocery stores and foodservice channels beginning in early 2020.