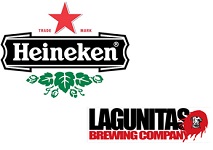 Dutch brewer Heineken is aiming to step up its presence in the US craft beer market with the purchase of a 50% stake in California’s Lagunitas beer brand.

Lagunitas, claimed to be the fifth top selling craft beer in the US, is planning to expand globally by forming the joint venture with Heineken. The company said it would still operate independently in the USA.

In a statement, Lagunitas asserted that both companies would benefit from the partnership. “This venture will create a way for Lagunitas to help Heineken’s global distribution network participate in the growing craft beer category in places from Tierra Del Fuego and Mongolia to the far-flung Isle of Langerhans”, Laguanitas founder Tony Magee said. “Lagunitas will share in the best quality processes in the world and enjoy an open door to opportunities that took lifetimes to build. This alliance with the world’s most international brewer represents a profound victory for American craft. It will open doors that had previously been shut and bring the US craft beer vibe to communities all over the world”.

The partnership agreement is expected to be signed and closed in the fourth quarter. The amount of the deal has not been disclosed.