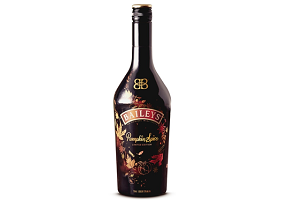 Diageo, the global spirits company, has launched a limited time flavour for its Irish cream liqueur under the Baileys brand.

The new Pumpkin Spice flavour comes in time for the autumn season and is described as a modern take on the classic Irish cream blends. The beverage is promoted as “unapologetically indulgent” and as blending flavours of sweet cinnamon and other baking spices, maple, brown sugar, and baked apple pie crust, with additions of vanilla and coffee.

“With the launch of Baileys Pumpkin Spice, consumers everywhere can indulge in the delicious new flavor that brings together two seasonal favourites, and exemplifies the spirit of Baileys”, said Diageo director of liqueurs Nicola Heckles.

Baileys Pumpkin Spice will be on sale from September until November with an RRP in the US of $24.99.