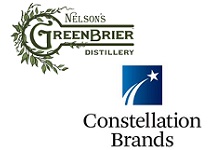 Constellation Brands, the wine and spirits firm, has announced it has acquired a majority stake in Nelson’s Green Brier Distillery, a craft whiskey firm.

Co-founded by brothers Andy and Charlie Nelson, Nelson’s Green Brier Distillery produces a variety of whiskeys under the Belle Meade Bourbon brand and is set to release a Tennessee whiskey later this year.

Constellation Brands said it had initially acquired in minority stake in the whiskey firm in 2016, since when it has spent three years collaborating, sharing consumer insights, and gaining deeper knowledge of what it described as two of the top trends in the spirits category – craft and whiskey.

Commenting on the move, Constellation Brands president and CEO Bill Newlands said the firm’s ventures division was created to identify up-and-coming brands, and that the company was excited about one of its first ventures investments being added into its portfolio. “Whiskey is a red-hot category, and Tennessee whiskey fills a white space for us”, he said. “Once integrated into our wine and spirits division and benefitting from our market reach, distributor partnerships and consumer insights, we see Nelson’s Green Brier scaling even further in the next few years”.