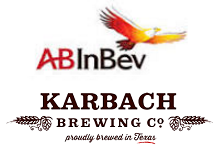 Having received federal approval, global beer giant AB InBev has been given the green light to acquire Texas-based craft brewer Karbach Brewing for an undisclosed amount. The deal, being transacted through the firm’s craft and import division The High End, is expected to close early next year, according to a report in Brewbound.

Karbach Brewing is described one of the USA’s fastest growing brands of craft beer, and there are plans to increase production from 40,000 in 2014 to 150,000 by 2019, once the deal has been finalised. Karbach Brewing produces flagship brand Hopadillo IPA as well as a kolsch called Love Street, Weekend Warrior pale ale and Weisse Versa wheat beeer, with additional seasonal beers.

The High End president Felipe Szpigel said: “From the beginning, [Karbach] have shown creativity and passion with the super beers they brew, and they’ve been able to use their unique offerings to appeal to the laid back lifestyle that resonates with Texans. Pair these qualities with dynamic leadership, an amazing brewing team, and a dream to do more, and you have a recipe for a promising future together”.