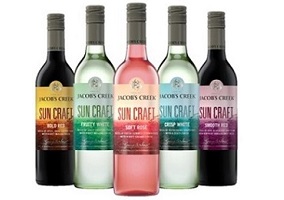 Leading wine and spirits firm Pernod Ricard is launching a new line of wine under the Jacob’s Creek range that is especially targeted at millennials, according to a report in Harpers.

Marketed under the name Sun Craft, the line consists of five varieties that are identified by their flavour profile rather than their grape blend:  Crisp White, Fruity White, Soft Rose, Bold Red and Smooth Red. It will be offered at an entry level price point at an RRP of £6 ($8.58).

Commenting on the launch, Pernod Ricard UK managing director Denis O’Flynn observed that the complex language associated with wine could be offputting to younger age groups: “Sun Craft we are planning on launching in the next couple of months and it is around an insight that we had around millennials”, he said. “Maybe some of the stuff around wine is getting to stuffy. It is around more simple messaging”.

Toni Ingram, head of marketing wine & champagne at Pernod Ricard UK, added: “We discovered that the millennial group of shoppers, who are typically aged between 18 up to 34, were unimpressed with the complexity and often confusing nature of the wine fixture. It’s with thanks to our thorough research that we have an informed new strategy”.