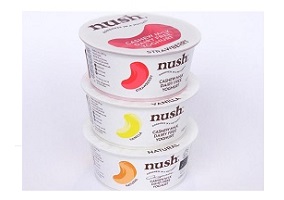 UK-based dairy free yoghurt maker Nush has launched what is said to be the first cashew milk yoghurt range in Europe.

Described as being produced using up to 20% of pure cashew and vegan probiotic cultures, Nush Cashew Milk Yoghurt is also said to be rich in plant protein and follows the firm’s launch of an almond milk yoghurt earlier this year.

“Following the successful national launch of our almond milk yoghurts and the overwhelming consumer response to the products, we are excited to be extending the range with another revolutionary offering, of Europe’s first cashew milk yoghurts”, a Nush spokesperson said. “We are excited to offer consumers even more choice in the yoghurt category, responding to the growing demand for nutritious, convenient and delicious dairy alternatives, which can be enjoyed as a satisfying snack or a versatile kitchen staple”.

Nush Cashew Milk Yoghurt is available in three varieties – Organic Natural, Strawberry and Vanilla – priced at £1.99 ($2.48) for a 125g pot.