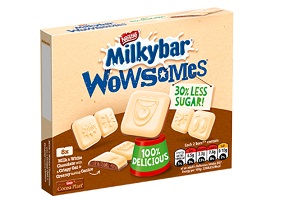 FMCG giant Nestle has announced that is launching its first chocolate bar based on new “structured sugar” technology.

Called Milkybar Wowsomes, the new product is claimed to be “the first chocolate bar in the world to use Nestlé’s innovative sugar reduction technique”. The technology is said to consists of creating aerated, porous particles of sugar that dissolve more quickly in the mouth, allowing consumers to perceive the same level of sweetness as before while consuming less sugar.

Commenting on the launch, Nestle UK & Ireland CEO Stefano Agostini said: “It is with great pride that the UK and Ireland becomes the first market in the world to use this exciting technology to create such a great tasting confectionery product. A new product like Milkybar Wowsomes introduces greater choice and allows parents to treat their children with chocolate that tastes great but has less sugar. We are demonstrating how we can, and will, contribute to a healthier future and that we take our public health responsibilities very seriously”.

Described as having 30% less sugar than comparable chocolate products, Milkybar Wowsomes will be launched across the UK and Ireland in the coming weeks. The range will have two variants: one made with white chocolate and one with combined milk and white chocolate and a centre of crispy oat cereal pieces.