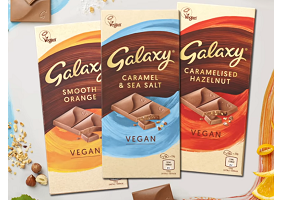 Mars, the global confectionery giant, is rolling out a range of vegan-labelled milk chocolate bars in the UK, according to a report in The Guardian.

The new line-up under the Galaxy brand will be offered in the varieties Smooth Orange, Caramelised Hazelnut and Caramel & Sea Salt, and will come in 100g packs bearing Vegan Society certification.

Commenting on the launch, Linda Lopez, the head of the sensory team at Mars, said: “The taste of Galaxy has not changed in the nearly 60 years since it was launched. We wanted to retain the classic smooth and creamy taste and texture without any compromise”.

Kerry Cavanaugh, unit director of chocolate at Mars, added: “This is our first vegan product and we felt it was time to offer fans of our best-selling Galaxy brand more choice. We expect it to be very popular at Christmas for families and friends to share, as well as in Veganuary”.