UK: Greene King to be sold to CK Asset Holdings 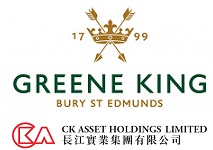 CK Asset Holdings, a Hong Kong private equity company, has agreed  a deal to acquire Greene King, Britain’s largest pub and brewery company, in a deal worth £4.6 billion ($5.6 billion), according to a Reuters report.

CK Asset Holdings is said to be paying £2.7 billion ($3.3 billion) for the beer firm, in addition to assuming its debt.

The Hong Kong firm already holds a 3% stake in Greene King and is also the owner of the Chef & Brewer and Hungry Horse chains.

Commenting on the deal, Greene King chief executive Nick Mackenzie said: “CK Asset Holdings is an experienced UK investor and shares many of Greene King’s business philosophies. They understand the strengths of our business and we welcome their commitment to working with the existing management team, evolving the strategy and investing in the business to ensure its continued long-term growth”.