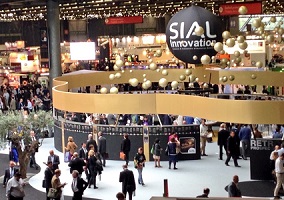 SIAL, the world’s leading trade fair for the food and drinks industry, returned in 2014 for its latest instalment.

2014 was an opportunity to mark the show’s 50 year presence on the FMCG scene and a diverse range of commemorative events helped to contribute to the sense of occasion. The mood was upbeat as more than 150,00 visitors packed into the show’s eight  exhibition pavilions.

In line with its self-avowed status as the “key trend observatory”, SIAL once again enthusiastically embraced all aspects of product innovation, attracting more than 1,750 entrants to its feature SIAL Innovation competition.

Given the sheer scale of the event, there was an inevitable diversity of new ideas, although it was long-standing themes such as convenience, health, special dietary needs and bold flavour  that proved especially prominent.

In the health arena, one of the more distinctive trends was that of ‘healthy grains’, with cereals including quinoa, wheat and chia, as well as pulses such as lentils and chickpeas, competing for space on stands alongside more traditional staples such as rice and pasta. Minsley Cooked Organic Brown Rice with Quinoa, Ebly Al Dente Fibre Wheat, Pedon Precooked Microwaveable Cereals and the Sabarot line of quick-cook pulses were among the products looking to tempt consumers with new and convenient meal accompaniment solutions. Meanwhile while the Dale Vida range of flours and seeds (including chia, amaranth and quinoa) and the Pereg Gourmet Soup Mix, containing “over 20 premium grains, beans and lentils”, looked at new ways of developing the role of ‘superfood’ cereals and pulses as ingredients in home cooking.

Elsewhere, another category proving a particular hive of innovation activity was seasonings, with a broad range of new formats and blends being explored. In packaging, pump and spray mechanisms were especially popular, cropping up in launches including Daregal Herb-Infused Oils, Pepperon Oil Free Seasoning, Woos Natural Fruit Foam and Terra del Tuono Balsamic Vinegar Mousse.  Developments in the world of vinegar were also particularly noticeable, with products such as Fini Balsamic Reduction in a squeeze bottle and the unusual French Cooker Natural ‘Julienne’ Vinegar Flakes displaying a new-found diversity of formats in the category.

Read more about SIAL 2014 in the October edition of Gama News.