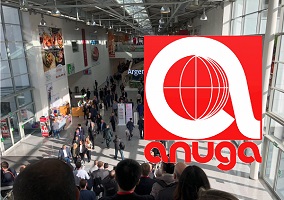 This October, the city of Cologne once again became a hub for the global food and drinks community as a record numbers of exhibitors, and tens of thousands of trade visitors, descended on the Kolnmesse showgrounds for the latest instalment of Anuga, one of the world’s leading trade fairs in the FMCG space.

In total, 7,405 exhibitors representing over 100 countries chose to showcase their product lines at Anuga 2017, a record number for the event and an increase of almost 5% on the previous edition. The products on show covered the diversity of the food and drinks industry, with individual halls  dedicated to meat, dairy, frozen food, soft drinks, organic produce, deli foods, hot drinks, fresh foods and bakery spread reinforcing Anuga’s self-proclaimed identity as “10 trade shows in 1”.

In terms of visitor numbers, Anuga once again pulled in vast crowds, with around 165,000 delegates estimated to have packed into the exhibition halls across the five days of the event. Organisers noted the show’s increasingly international dimension, with the share of visitors from outside Germany up to 75%, an increase of seven percentage points on 2015: Italy, Spain, France and the Netherlands were said to have been especially well represented compared to previous editions.

Despite the diversity of categories on display, many product launches and innovations coalesced around a number of broad yet distinct themes, many of which, if not wholly new, could perhaps be described as an intensification of pre-existing themes and trends. Thus protein benefits loomed larger than ever, and coconut in all its various manifestations continued to flex its muscles in a whole host of categories, maximising its multiple identities as a healthy indulgence, a satiating superfood and a dairy and meat alternative.

Read more about Anuga in the next issue of Gama News.