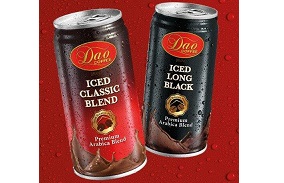 A new RTD canned coffee is set to be launched in Thailand under the Dao brand, according to a report in Press Reader.

Available in Iced Classic Blend and Iced Long Black varieties, the product was launched by former Bangkok governor Apirak Osayodhin through a joint venue called V Foods (Thailand), a food and beverage company with registered capital of 10 million baht. According to sources, V Foods signed a memorandum of understanding with Dao-Heuang Group – the largest coffee producer in Laos – to secure the right to produce and distribute canned coffee under the Dao Coffee brand in Thailand.

According to reports, V Foods is expecting to make total sales of 300 million baht this year, in addition to launching a further three new products.