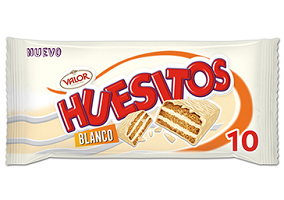 Leading Spanish confectionery company Valor has expanded its Huesitos range of chocolate coated wafer bars with the launch of a new Blanco variety based on white chocolate.

The new variety is reportedly the first launch under the Huesitos brand since its acquisition in 2013 from Mondelez International. Huesitos Blanco joins an existing range that includes both Original and Leche (Milk Chocolate) varieties.

Commenting on the launch, a company spokesperson said: “We are confident that the new Huesitos will be loved by young and old alike”.

The new Huesitos Blanco is being made available in four formats: a single 20g bar targeting impulse purchases, as well as multipacks of six, ten and twelve bars for the retail channel.