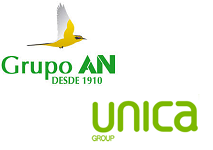 Spanish fresh produce cooperatives Grupo AN and Unica Group have announced that they are to merge.

Grupo AN is the largest cereal cooperative in Spain, comprising 145 farming cooperatives in the regions of Navarra, Aragon, Castilla y Leon, Castilla La Mancha, Rioja and the Basque country. Its members also include poultry, fruit and vegetable producers.

The Unica cooperative produces fruit and vegetables in addition to processed products such as gazpacho soup. It brings together 1,400 individual growers with a combined production of 160,000 tonnes.

The combined company, which will see Unica Group operate under the Grupo AN name, will reportedly generate turnover of around €919 million ($988 million) in total ( €684 million from Grupo AN and €235 million from Unica), consolidating Grupo AN as the second largest cooperative in Spain by turnover.

Commenting on the deal in a statement, the two companies said: “The aim is to consolidate our position in all markets – both internal and overseas – and in all sectors, be they fresh, preserved, ready-to-eat or prepared, in order to achieve greater efficiency and better defend the interest of our grower members”.