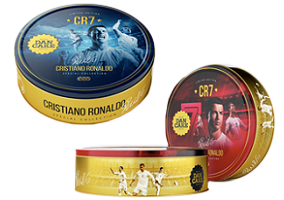 Portuguese bakery firm DanCake has announced that it is partnering with celebrity footballer Cristiano Ronaldo to launch a limited edition biscuit range under the CR7 brand.

According to company information, the limited edition tins will be available in a choice of two designs, one with a predominantly dark blue theme and one in dark red, in each case complemented by a gold border.

The DanCake deal is the latest FMCG tie-up for the CR7 brand, with the Portuguese athlete previously announcing a partnership with sports drink brand Herbalife under the name CR7 Drive in September 2015.

DanCake said the aim of the partnership was to “strengthen the image of Portugal” and project an iconic brand in the world, associating its “best biscuits” with someone considered one of the best sportspeople in history.

The limited edition DanCake CR7 Butter Biscuits will be launched from May across more than 80 countries.