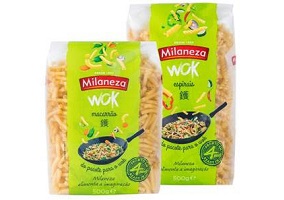 Portuguese pasta manufacturer Cerealis has recently launched a new range of pasta under the Milaneza brand that is designed to be cooked in woks rather than in a traditional saucepan.

According to the company wesbite, Milaneza Wok Pasta does not require pre-cooking so it can be added directly to the wok. The consumer needs only add water equivalent to half the volume of pasta alongside any other fresh ingredients of choice.

Commenting on the launch, Cerealis marketing director João Paulo Rocha said: “More than 15% of Portuguese households use [woks] in their everyday cooking, especially younger consumers and those in major urban centres “.

“This is an innovative concept that responds to the growing trends for balanced nutrition that is convenient, versatile and inspired by the East”, he added.

The pasta can reportedly be cookd in four minutes and is available as Fusilli and Macaroni.