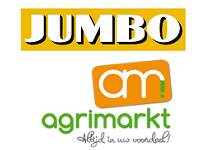 Jumbo, the Dutch grocery retailer, has announced it has agreed a deal to acquire the Agrimakt retail chain from the agricultural cooperative CZAV for an undisclosed sum.

Agrimarkt operates a network of six stores in Goes, Middelharnis, Roosendaal, Vlissingen, Oud-Beijerland and Terneuzen in the south-western Netherlands, employing around 360 staff.

Commenting on the proposed deal, CZAV general director Antoon van Vugt said: “Developments in the supermarket space have made it clear to us that Agrimarkt has better growth potential with a strong formula where the focus is on operating supermarkets and serving customers in an omni-channel environment”.

Jumbo CEO Frits van Eerd added: “This acquisition fits well with our growth ambitions, and the Agrimarkt stores are a nice addition to our current store network in the southwest of the Netherlands.  Earlier this year we opened a logistics hub in Middelburg for the delivery of online groceries. Together with these news stores that we will operate under the Jumbo banner, we now have a wide presence in this part of the country”.