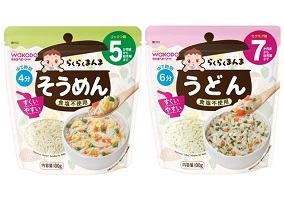 Claimed to be “easy to scoop”, the noodles are pre-cut into 1cm lengths, reportedly making them easier for babies to eat and more convenient for mothers since the cooking time is shorter than regular noodles.

Described as free from salt and offered in 100g pouches, Rakuraku Manma baby food will hit shelves from March 2017.