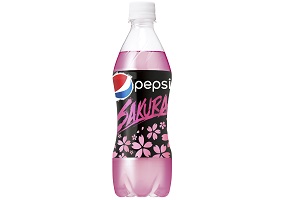 In the latest of a line of unusual cola launches, beverage firm Suntory has unveiled what is claimed to be the world’s first cola with the flavour of cherry blossom (sakura).

Pepsi Cherry Blossom Cola is said to have the same pale pink colour as cherry blossom itself and is described as having a fragrant, sweet aroma that “adults can enjoy”. The 490ml bottle is designed to be high impact and features a black background with the word “sakura” written in calligraphy-style pink lettering. The product will hit the shelves from March 8th, carrying an RRP of \140 ($1.20).

Suntory, which owns the Pepsi brand licence in Japan, has previously launched a number of other novelty colas, including flavours such as baobab and strawberry milk.