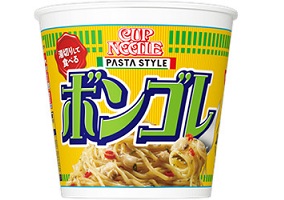 Nissin Foods has announced the launch of its first instant pasta range in Japan.

Added under the Cup Noodle brand, the new range is called Pasta Style and is available in two varieties: Vongole and Bolognese. According to the manufacturer, the product features newly developed round, thick spaghetti that provides a ‘moist’ texture.

The “casual style, easy” product is also said to feature irreverent publicity which reports that 86% of Italians questioned did not recognise the cup noodle product as being ‘genuine’ pasta.

The Vongole variety is claimed to feature flavours of clam, olive oil and garlic, while the Bolognese (93g) option is to have a rich flavour of tomatoes and vegetables with herbs. Both go on sale with an RRP of 198 JPY ($1.60).