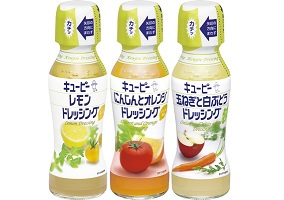 Kewpie, the Japanese seasonings firm, is launching a new “green cap” series of salad dressings that are claimed to “maximize the flavour of vegetables”.

The new dressings have reportedly been launched with the aim of increasing the consumption of salad vegetables and to give a new boost to the salad dressings market. Each variety is available in a 150ml glass bottle with an RRP of ¥238 ($2.08).